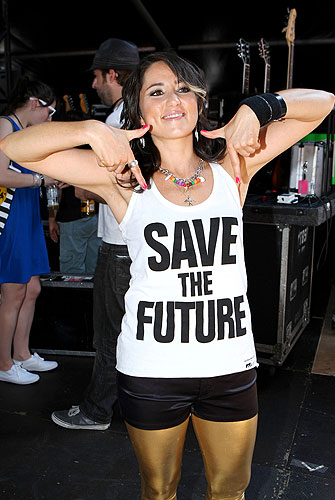 American Magazin Rolling Stone has an interesting article on how Radiohead, Drake, Phish, The Roots, KT Tunstall (in the picture) and others are going green by recycling, using biodiesel and planting trees.

„The life of a musician is known for its excesses. But the abuse stars do to their bodies doesn’t even compare to the toll that recording, releasing and performing music takes on the environment: Just one stadium show might produce as much as 1,000 tons of carbon dioxide. The good news is that increasingly artists are attempting to take responsibility and move toward greener alternatives, either by cutting back on their use of harmful products like fuel and plastic or by devoting time and money to promoting environmental causes. Here’s a look at 15 artists on the forefront of a still-growing movement...“